Home › Blog › Pest Control For Fleas Near Me (Davidson Exterminators)

Pest Control For Fleas Near Me (Davidson Exterminators)

They are more than just a mere nuisance, they are also disease carriers. It can be quite frustrating to have fleas; they affect both our pets and our family. Their bites are itchy and can cause irritation and infection. Just look at your poor pet scratching non-stop each time he gets hit by fleas; if only there is a way to ease his pain. Fortunately, there is! There certainly are ways to control the spread of fleas. Lake Norman Pest Control, the best flea control experts in Davidson, would like to share some tips and tricks for you to get rid of these little parasites. But first, like in any battle, you have to know your enemy. Knowing what they look like, and knowing their habits, habitat, and what they are capable of doing is the first, most important step in controlling fleas. 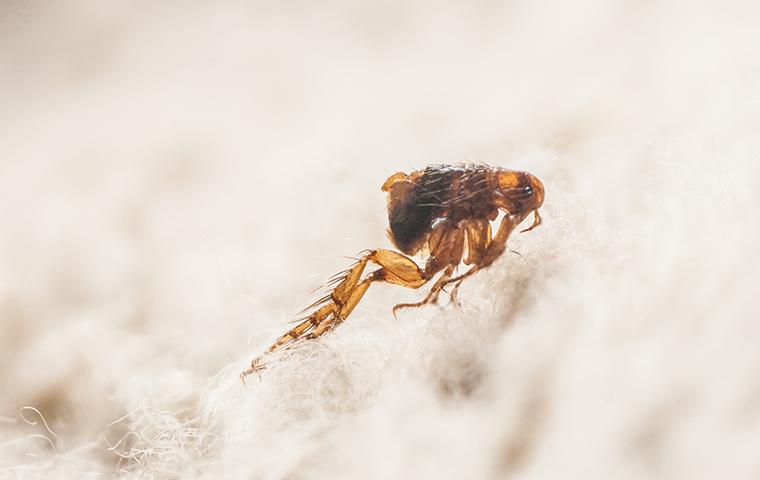 Fleas are parasites that feed on the blood of animals and humans. They are tiny, flat, and wingless insects. They have powerful legs that can make them jump up to 8” vertically. Standing at just 1/12 to ⅛ inch, this means they can jump up to more than 100 times their height. If we could only have those powerful legs, we can be like Superman and leap over buildings with ease. Fleas transfer from one host to another by jumping. Or they just lay in an ambush while in your carpets, waiting for a cat, dog, or even a human to pass by.

Fleas have 6 legs, antennae attached to their heads, and are dark reddish-brown in color. They have long claws that help them latch on to the skin of their hosts. Their bodies are flattened sideways which are perfect for going around the hairs of their hosts.

Fleas go through four stages in their lifetime and undergo complete metamorphosis all their lives. They go through the egg stage, larva, pupa, and finally the adult stage. Adult female fleas can lay up to 40 eggs a day. It will take a flea egg two days to hatch. The female adult flea breeds and lays her eggs on her host, but the eggs usually fall far from the host and can be found in carpets, furniture, plants, and in other areas of the house. The adults are white and oval-shaped. It is the size of a grain of sand. After the eggs hatch, they become larvae.

They are small, slender, and look like maggots. Larvae are already independent feeders and they eat organic debris that can be found in their surroundings. They also eat adult flea feces, which is actually dried blood. They remain this way for five days. It then gets into a cocoon, and will not emerge from it until they sense a host. The cocoon is oval in shape and is about 7 mm in length. It is sticky and hard to see because it is camouflaged with its surroundings. When a host is near, they emerge as adult fleas. They are encouraged to go out of their cocoon by the heat, vibrations, and the carbon dioxide emitted by the hosts.

A female flea can only start laying eggs after she has had her first blood meal. She can start doing so after 1 to 2 days of that meal. After that, the whole cycle would restart.

Fleas can live up to 3 months. The female flea will produce at least 400 offspring during her lifetime.

Fleas will attack humans if they have no choice. If cats and dogs are around, fleas would rather go for them. That is because humans do not provide them the proper body temperature for them to breed.  They would not survive long on human skin. Besides, humans do not have enough hair for fleas to hide in and latch on to.

Common Types Of Fleas In The United States

There are around 2,500 identified species of fleas, and they can be found all over the globe.  Fortunately, there are only 200 of them that can be found in America. We are highlighting here below the most common ones we see. They are:

1. Cat Fleas - Male cat fleas are 2 to 3 mm long, while adult female cat fleas are 4 to 5 mm. Their main hosts are cats, but they also feed on dogs, humans, and other animals. Indoors, they usually hide on carpets, but can also hide on indoor plants and clothes. They lay their eggs on cats and dogs, but usually, these eggs fall off around the house.

2. Rat Fleas - Rat fleas are usually found not only in rats but in humans as well. They are small parasites that feed on the blood of rodents and humans. They are suspected to be the main vectors of the bubonic plague, a disease that ravaged more than half of Europe’s population. Their mouths are used to inject saliva and draw blood for feeding. Rat fleas are classified into two: the Oriental rat fleas and the Northern rat fleas.

The Northern rat fleas are native to Europe. The size of their bodies is about 3 to 4 mm in length. Among all its genus, they are the most widely spread. On the other hand, the oriental rat fleas are about 2.5 mm in length and are very good jumpers because their body shapes are perfect for jumping. It could be the Oriental rat fleas, rather than the Northern ones, that were the cause of the bubonic plague.

3. Human Fleas - Human fleas infect humans. They are really nasty pests because they can spread diseases like the plague. They are slightly bigger than the cat and rat fleas, at about 1.5 to 4 mm in size. They like to hide in the hairy parts of the human body, especially on people who do not practice good hygiene.

5. Springtail Fleas - They are sometimes referred to as snow fleas. They like to live in damp areas, decaying logs, and soil. They are about 1/16 of an inch in size but are very good jumpers. They can jump up to four feet. Unlike the other flea types, they do not bite but are certainly a nuisance pest.  They do not attach themselves to animals.

Fleas can transmit some nasty diseases and have proven to do so over the entire course of human history.

Fleas bite, and their bites are extremely itchy and could sometimes lead to infection. They inject saliva while sucking on the blood of their hosts.

Fleas are also known to spread various deadly diseases that include Rickettsial diseases, bartonellosis, the bubonic plague, murine typhus, tularemia, and tungiasis. They would rather feed on dogs’ and cats’ blood but can attack humans in the absence of these pets. Fleas are more suited to being in hairy hosts, plus they have high body temperature, so they cannot survive long and breed on humans.

A sign to warn you about the presence of fleas is when you find your dogs constantly scratching. Flea bites are very itchy, so you should inspect further. Using a flashlight, look for fleas on your pet’s belly, armpits, ears, inner thighs, and tail. Fleas love the hairy parts. You may check your dog’s fur for the presence of flea feces. They look like little specks of dirt, which are mainly blood. To check if these really are flea feces, use a paper towel to pick them off. If they spread out like stains, then these are flea feces.

If you find these signs, you better act fast. Fleas reproduce all the time. One flea can give you 500 in a matter of months.

We understand that getting rid of fleas is like climbing a mountain; it is very exhausting. If you are overwhelmed by the presence of fleas in your home, then it is time to call in flea exterminator in Mooresville, NC since 1959, Lake Norman Pest Control.