Home › Blog › The Problems Associated with Stink Bugs In Mooresville

The Problems Associated with Stink Bugs In Mooresville

The brown marmorated stink bug (Halyomorpha halys), or simply the “stink bug,” is an invasive species that is believed to have originated in Eastern Asia.  Since first emerging in the U.S. in the 1990s, stink bugs have been found in more than 40 states. Stink bugs are aptly named because they will emit a foul odor when they are threatened or squished, and they are gross to have in Mooresville homes. 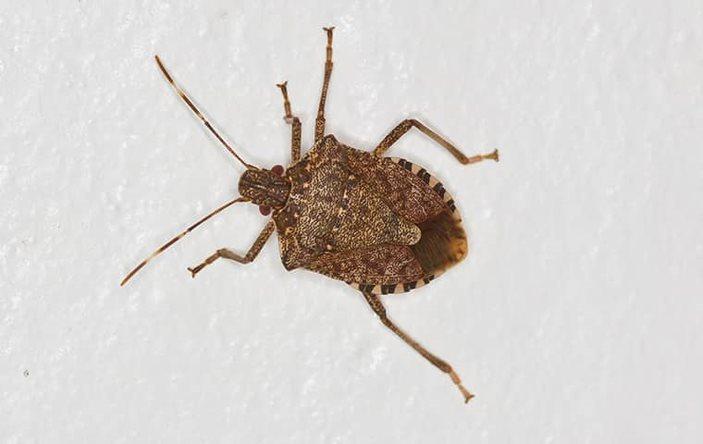 They are identifiable with a brownish-gray color, six legs, and pair of long antennae. Adult stink bugs reach lengths of approximately ½ of an inch and are equipped with wings that allow them to fly. When indoors, stink bugs generally remain hidden in warm places such as small crevices or attic areas.

Stink bugs generally emerge during the spring and begin reproducing in large numbers. Fortunately, they are not known to spread disease and don’t bite; however, they will destroy landscaping and may trigger allergies.

Stink bugs seek warmth during cooler months of the year and often appear indoors during the fall. They will enter the interior of a home through small openings, appear near lights, and crawl on walls and ceilings. Stink bugs are known for overwintering indoors in dry, enclosed spaces until emerging in the spring.

After resuming activity in the spring, stink bugs lay eggs, which will hatch after several days and pass through a stage as nymphs that appear in yellow, red, and white colors.

Tips For Preventing Them

Some of the best practices for preventing stink bugs include:

Many property owners try various do-it-yourself treatment options in an effort to expel many of the common pests that invade homes, including aerosol sprays, powders, and granular concentrates. Many of these products that are sold in local home improvement stores and by online retailers create short-term results that are not a realistic solution. Also, these options could contain potentially harmful chemical agents.

The team of environmentally conscious professionals with Lake Norman Pest Control is committed to operating in a manner that protects our customers, their pets, and the local ecosystem. Our organization participates in the EPA’s Pesticide Environmental Stewardship Program (PESP), which promotes new products and treatment options that have proven safe and effective.

When you contact our experts, we will deploy a certified technician that will thoroughly inspect the interior and exterior areas of the property to assess the problem. We will identify any possible entry points and check hard-to-reach places to gauge the scope of the infestation. Keep in mind that a satisfaction guarantee always backs our treatment plans.

Lake Norman Pest Control has been providing reliable pest solutions for residential and commercial customers for many years now in the local Mooresville region. We are trained and well-equipped for eradicating problems involving ants, bed bugs, termites, and a host of other unwanted and potentially harmful pests.  Contact our office today to schedule an inspection and receive an estimate.